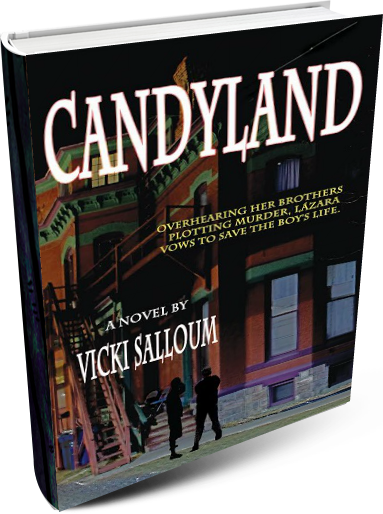 “You’re not making any sense. Nicholas doesn’t do drugs.”

“I saw him with my brothers. Twice. I mean, if he doesn’t do drugs why would he be with them? Why would he owe them?”

Eric Hutchins saw in her eyes the flicker of hesitation and just as swiftly it went away.

“I didn’t see him clearly the first night,” she stammered. “It was dark. I only saw him walk away. But there was something familiar about him when I saw him in your office. And, later, I made the connection. I went and spied on them at their second meeting—Candyland—and, for sure, it was him—your son—”

“A shack across the street from Egg’s. On St. Bernard Avenue. A rundown shotgun double. The street calls it Candyland. It’s been empty since the storm, except—”

“I won’t get into that right now. All you need to know is I saw him. I hid behind a tree and saw him. He was telling them he couldn’t get it. And they were giving him another chance. He said he’d bring it tonight. Eleven. Candyland. They’ll kill him—”

It was coming at him so fast, Eric couldn’t get a handle on it. His son might be many things but the person she was talking about he never was. He wanted more time to think; the girl kept babbling on:

“They’re gonna whack him, Mr. Hutchins. He can’t get up a thousand dollars. He says he’s gonna rob a liquor store. He’s serious. You’ve got to stop him—”

Here was this girl standing before him, at three in the fucking morning, a girl he’d hired four days ago, ripping his heart apart like some cat flipping a wounded cockroach.

Bracing himself, Eric picked up the phone. “Son, get over here right away. I’m at the office. There’s something we’ve got to talk about.”

He sounded so composed but his hand was shaking and he could barely hold the receiver. “Get the hell out of bed now!”

He could feel his white-hot rage. “If you’re not here in ten minutes, I’m coming over and drag you out.”

Eric slammed down the phone. The girl was pasty white, looking overcome, as he was, both of them leadenly tired, over the edge. Don’t say anything you’ll regret. He couldn’t hold back his mounting anger.